Fall Fun In Pigeon Forge, Tennessee With The Family Part One #PFTitanicFAM

0 Share0 Tweet2 0
I wrote a post a little over a week ago about our upcoming weekend getaway to Pigeon Forge, Tennessee. We love the area and, in fact, that is where my husband and I got married almost 7 years ago this December! We were excited to take the boys and knew they would have a great time. We arrived at our hotel

, the Music Road Hotel, a little late due to Friday traffic, but as soon as we went inside, the kids were very impressed not only that they had a pool, but an entire outdoor water park that was still open since the weather is was warm. We checked into our room and happily got some rest for the next days of fun.
That morning I went down to the breakfast buffet and they actually had a tray so I could carry food back up to our room for everyone. That was so nice and made it easy to get everyone ready to go. Before leaving, we went for a walk on the back porch of the hotel

and noticed it sat beautifully on the river and had the most amazing view, so we had to take some pictures of the boys. Here's a picture of them ready for our fun day to begin: 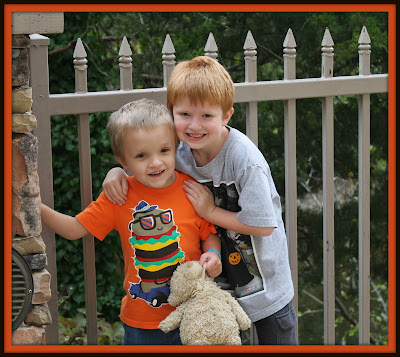 Our first stop of the day was at the Titanic Attraction, something Josiah has been learning about and something in which he is very interested.

About the Titanic Attraction
Titanic Museum Attraction in Pigeon Forge is a celebration of the ship, passengers and crew!  It is said that the best way to respect and honor those who gave their lives is to simply tell their stories.
We stepped inside the boat as a passenger and received our tickets upon entry. We were given a device so we could listen to educational information as we moved through the ship. The great thing about this was the ability for kids to participate, too. When kids saw certain numbers, they punched in the code and could learn about the children of the titanic or other interesting details like how many pets were on board the Titanic! 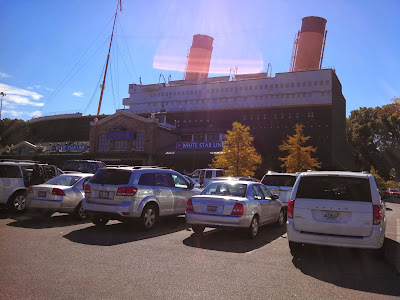 Unfortunately, we were not allowed to take photos inside the attraction because it was absolutely wonderful and something I recommend for all families visiting Pigeon Forge. We all learned so much about the ship, its trip and the passengers. We also had a chance to walk through different parts of the ship and experience life as a 1st class, 2nd class and 3rd class passenger. There were special items created for all the different classes

, of course the 1st class being the most elaborate and beautiful. 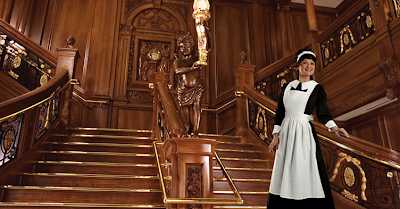 My initial worry was whether or not the kids would stay interested, but as we went through each part of the ship, their eyes got wider and they were asking more questions. Liam did not even want to leave. Josiah especially liked getting to touch an iceberg and feel how cold the 28 degree water was the night the Titanic sunk. I loved the beautiful Grand Staircase, created to look just like the one on the Titanic, which is featured in the photo below. We were able to walk up and down as part of the tour. After going through the ship, you really get a feel for what it was like onboard the luxury liner and how tragic the accident was.

After our tour of the Titanic, we decided to head back to the hotel

and relax for a few hours. We ordered pizza from a local pizzeria and had to delivered straight to our room, which was so delicious and relaxing. Around 4pm, we headed to our next stop, the Hatfield & McCoy Dinner Show!

About the Hatfield & McCoy Dinner Show
I was really excited about this part of our trip because I knew this would be a hilarious show for the kids. The feuding Hatfield and McCoy families are at it again and we are right in the middle of the fight while they try to settle their differences in a way that only mountain folk can do.

We were seated on the Hatfield side of the room and became part of the family. Our "cousin" served us food as soon as we sat down. First we got our sweet tea, a southern staple for all families and something Liam loves. For dinner the food was never-ending! Then, he brought a creamy vegetable soup that everyone loved. The great thing was that we could purchase it in the gift shop after the show and that's exactly what we did. We received a bucket of delicious fried chicken, country pulled pork shoulder, which was Josiah's favorite, mashed taters, cole slaw, bread and corn on the cob. 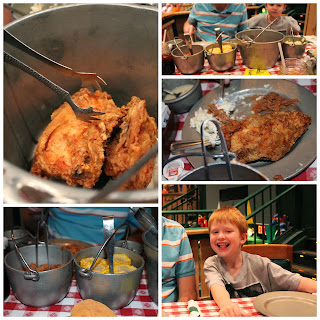 Soon after getting our food, the entertainment began! A great group came out and played country music and the award-winning yodeler showed us just how good she was. Afterwards, the Hatfield and McCoy families came out and began the hilarious show. 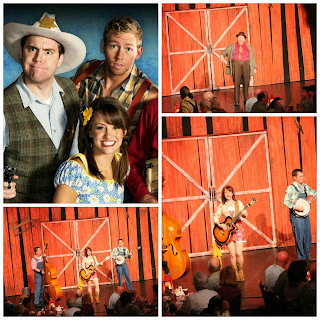 We had a great time watching the show and even had dessert during it! Afterwards, we took a stroll around the gift shop and outdoors. There were many props set up outside and the kids had to check them all out. 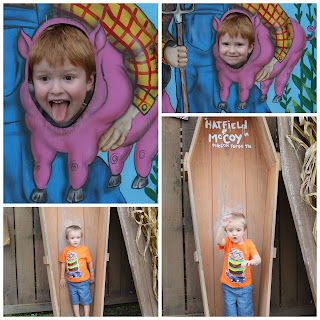 Those hilarious boys had a great time and even wanted to go back the next day. However, the fun was not over yet. We still had more attractions to see, which will be featured in our next post!

Have you ever been to Pigeon Forge? Now's a great time for a family trip and with fall school vacation

time coming up, you can get some great deals at The Music Road Hotel. Our next post is coming up soon!

Proud Member of The US Family Guide Network